The picture below is from early June. At the time, this was the extent of the garden I planted at the camp where I work, when things were just starting to pick up. I'm pleased to report that since then the garden has quite exceeded my expectations, but also that there was a significant twist along the way. 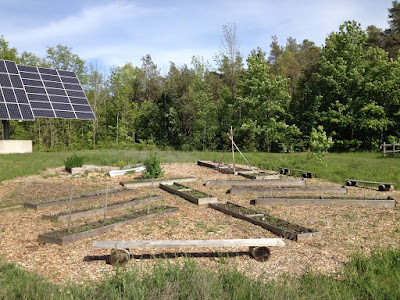 For a few years now I've been consulting a book by Carol Deppe called The Resilient Gardener. I've explored the topic of resilience elsewhere on this blog, and Deppe's views on the need for personal and collective resilience in the future unfolding before us have a lot in common with mine. But even more relevant to the present season, her gardening style has been intimately shaped by personal health concerns.

Deppe has celiac disease, an intolerance to wheat and related grains. Most of the carbohydrates in her diet come from corn, squash, and potatoes, which she found were more flavourful when she grew them in her own garden rather than relying on commercial varieties. For a period of time she was also deeply involved in caring for her ailing mother. Whenever her mother entered another round of illness or crisis, Deppe had to abandon her garden for days or weeks at a time, and her crop yields suffered accordingly.

The way she describes her change in philosophy is so eloquent that I'll quote directly from the book's introduction:

These days, we tend to design our gardens and our gardening for good times, times when everything is going well. That isn't what we need. Reality is, there is almost always something going wrong. Hard times are normal. My experience of gardening while caring for my mother helped me realize that I needed to garden differently. My garden needed to be designed around the reality that life has its ups and downs. It has good times and bad. How to garden in the best of times was not the issue. I didn't need a 'good-time garden'. I needed to understand more about how to garden in hard times. I needed a more resilient garden. And I needed a garden that better enhanced my own resilience, in all kinds of times, good and bad.

I found myself in a similar situation this summer. Although I've thankfully stayed in good health, my six-month, May-to-October job living and working at camp didn't turn out as planned. In mid-May the provincial government announced that overnight summer camps would not be allowed to run this year. This came only a few weeks after I'd moved up to my tiny cabin in the woods and only a day after my colleague and I had finished working a trailer load of compost into the garden's raised beds and planting all twelve with crops that- we hoped- the kids would enjoy harvesting and eating. 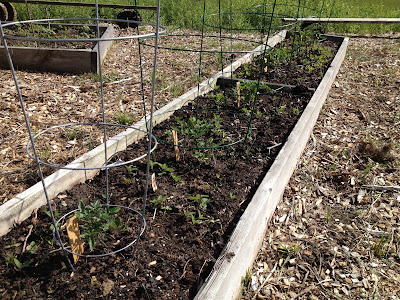 How about pumpkins, or fresh salad greens? 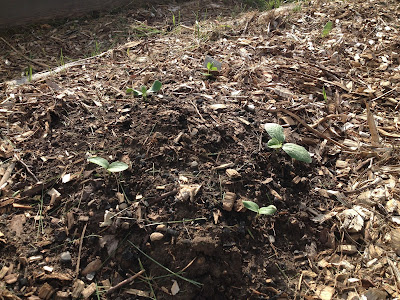 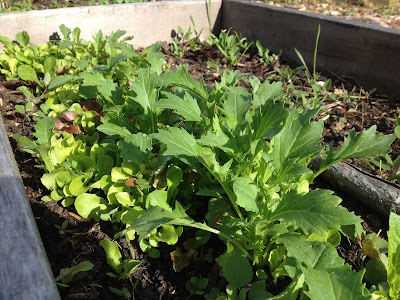 Or maybe (an annual favourite of mine) multi-coloured potatoes, sown in half-full buckets and steadily covered over with earth as the plants grow, producing layer after layer of pink and purple spuds? 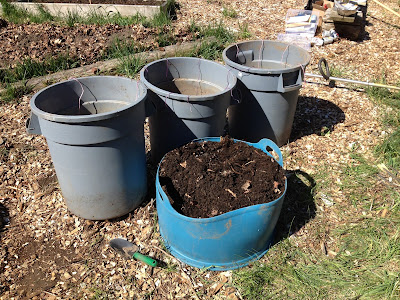 Fortunately the government couldn't stop the plants from growing, and through June and July the garden flourished. There was enough other work on site for three of us to keep busy at: we kept the property in good condition and made repairs and upgrades while we waited to hear whether we'd be allowed to run day programs for kids from the surrounding area. Throughout that time we enjoyed all the greens, beans, and cucumbers we could eat as we watched the other crops grow and change.

The tomatoes filled out their cages... 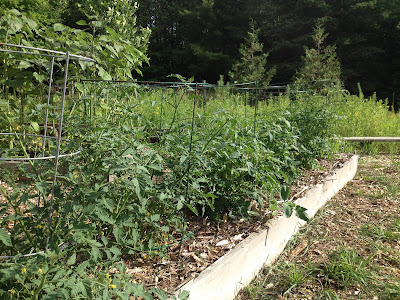 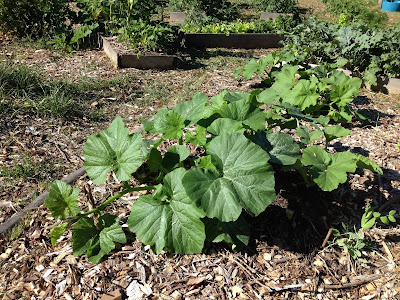 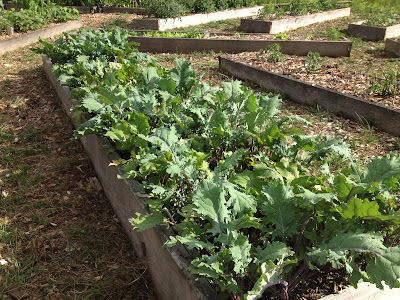 Even the potato plants reached for the sun, and were rewarded with fresh layers of earth mixed with compost. 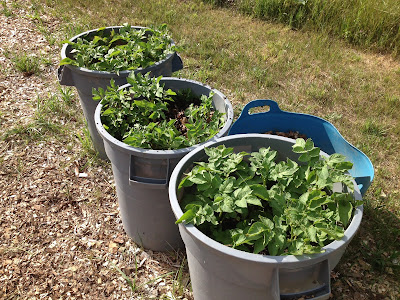 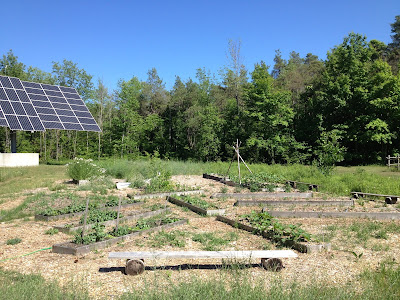 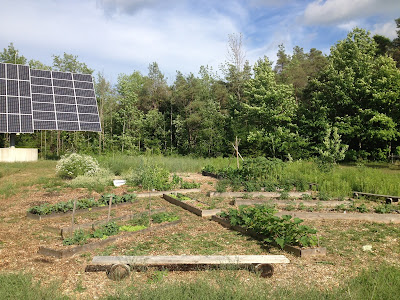 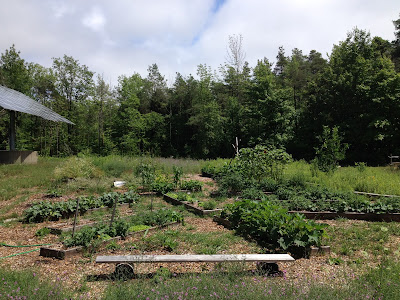 Then we got word that day camps were cancelled too. The three of us were to finish up what we were working on at camp and move back to the city on August 1. A crack team of staff had been building and running an online camp program for the kids via Zoom, and that would end up being the mainstay of this year's summer program.

Throughout that spring and early summer of uncertainty, the garden had been an oasis for me, a sure source of calm and steady purpose and, of course, snacks. I went there most evenings to weed, water, and talk on the phone with friends and relatives far away. Now that I was leaving, its resilience, as well as my own, would be tested. 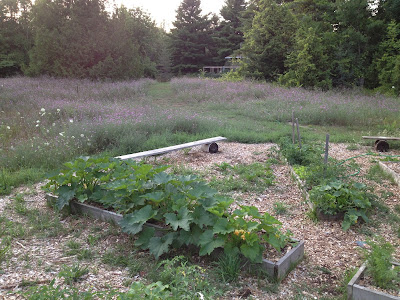 Unlike Carol Deppe, whose gardening was frequently interrupted without warning, I was able to do a few things to prepare for this transition. I made sure I stayed two steps ahead of the weeds, which meant pulling and tossing them before they released their seeds all over everything. My plants, now mature but not yet fully fruiting, got a fresh layer of wood chip mulch spread over their beds. In Oregon, where Deppe gardens, it's too rainy and damp for mulch to help with anything except birthing hungry slugs, but in the hot, dry summers of southwestern Ontario, mulch of any kind helps hold moisture in the soil. It's also a terrific help in preventing mid-season weeds from getting started.

Here's that pumpkin patch again, with a circle of bare soil surrounded by a protective sea of wood chips: 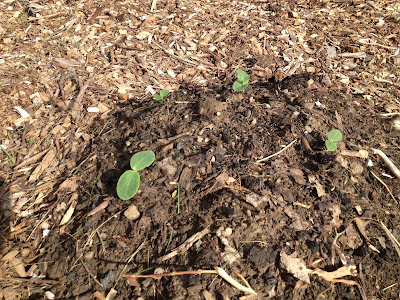 The main factor in garden resilience, of course, is healthy soil. I had the good luck of inheriting the hard work of the camp's previous garden coordinator, who had built up the raised beds and nurtured them with compost and sheep manure. This year's trailer full of compost was graciously supplied by her family's farm back in early May. My colleague and I worked it into the beds with pitchforks, mixing and loosening while being careful not to turn the soil structure completely upside down, the way a plow or rototiller does. Once healthy organic soil structure has been established, as it had been here, less intervention is generally more.

August was tense. I watched and waited, and finally the camp was given the go-ahead to host fall weekend retreats, with careful health protocols in place. After four weeks away, I returned to my garden to find it changed indeed. The tomatoes, just starting to show colour when I'd departed, were now rotting on the vine. Big leafy pumpkin plants had exploded out of their own bed and overrun their neighbours'. The kale had attracted chewing insects of some kind, and the potato plants were peering down from well above the rims of their buckets. 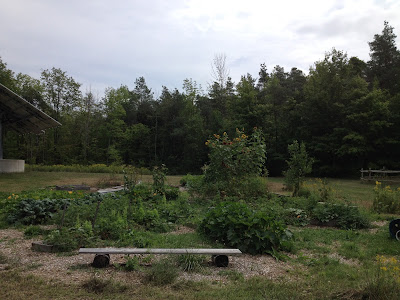 Overall though, it turns out that when left to their own devices plants still grow and do their thing. Lettuce gets stalky and goes to seed, sunflowers blossom and attract bees, and zucchini plants spawn monstrous fruit in the shade of their enormous leaves. Raccoons enjoyed the sweet corn that we missed out on. But the garden still had enough diversity of crops that some things were coming ripe into early September. 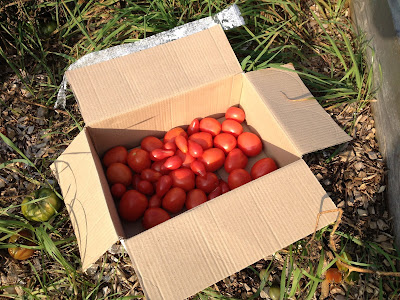 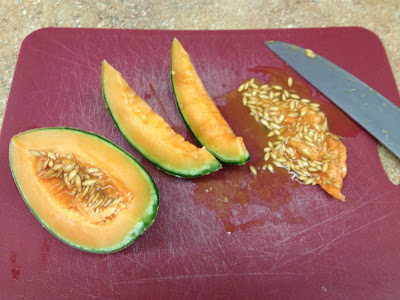 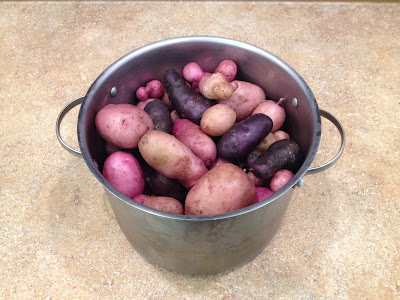 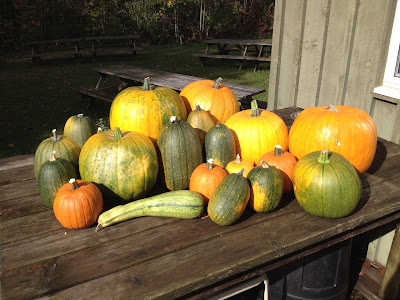 Oh, and we were finally able to host some kids at camp, during the Fall Family Hike weekend. They had a good time with those pumpkins. 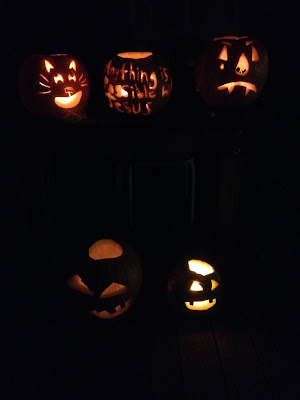 This year has been a good test. How resilient is my way of life, exactly? Am I prepared to keep going through good times and bad? Do I fret when my good-times plans don't turn out the way I'd hoped? Or am I thankful for what I do get to enjoy of the fruits of my labour? 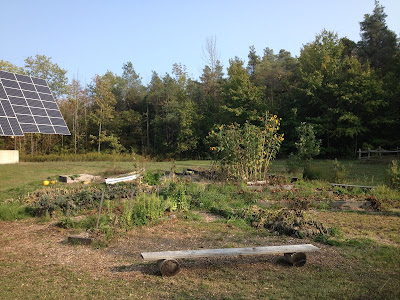 Most importantly, am I able to trust that the cycles of life will continue? That giving up some of my hopes for this year and spading them into the soil to nurture a future year's harvest is an okay and perfectly natural thing to do? 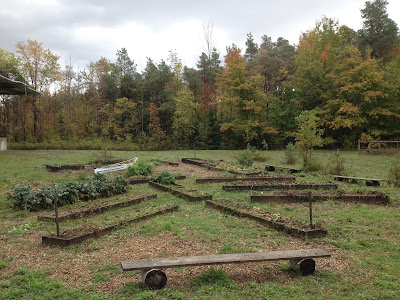 Winter is coming, and with it the time for reflecting on what has been and dreaming of what will come. Resilience, to me, means knowing that although the oasis is currently out of sight, when the time is right I'll be able to plant it anew, wherever I find myself. 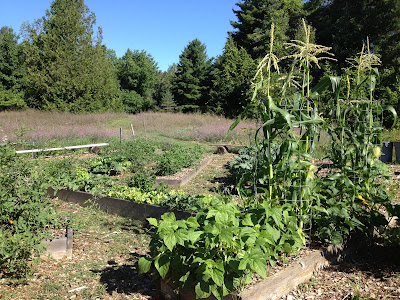 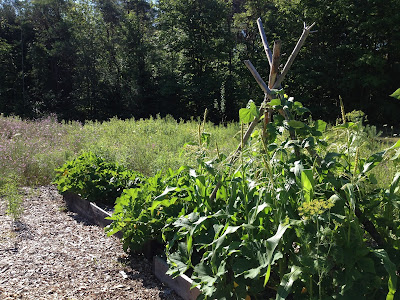 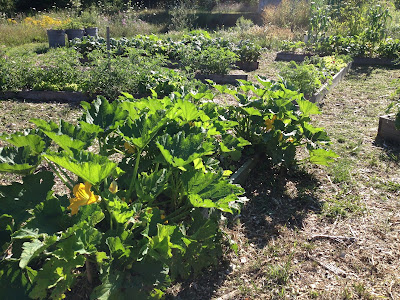 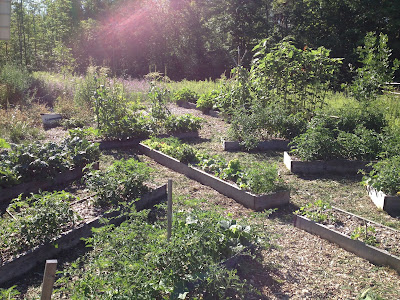 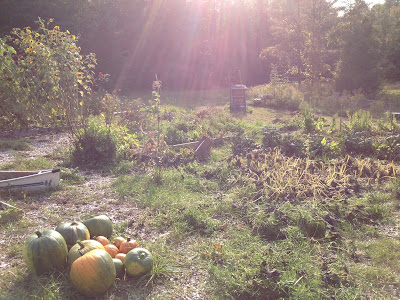