For a while now, one of the things I've wanted to have more time and room to tinker at is composting. Growing food is fun and all, but composting is the real cool, deep, satisfying part of gardening. Instead of taking material away from the soil, composting adds to it. Kind of like putting funds in a savings account for later, rather than withdrawing all the time.

Just outside the kitchen window here at camp is a neat little solar box that someone built a long time ago, for seedlings I think. I arrived in early May and we got snow almost right away, so it didn't seem like the right year to try my hand at starting seeds outdoors. But almost any time can be compost time, if you have the right ingredients at hand. 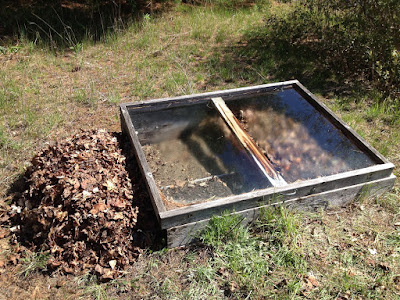 I decided to give it a try. I started by loosening the soil with a pitchfork, twelve inches deep. On the left-hand side of the image below, you can see the flat, packed-down sand which was there initially. On the right, the soil has been loosened (but not mixed) so that it can hold more air and moisture and little squirmy things. Nothing has been added so far but my own elbow grease. 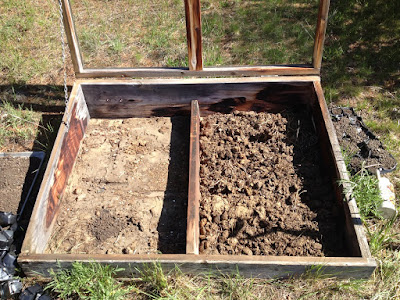 Next I broke up a bunch of twigs and sticks I found lying around, and threw them on top of the chunky soil. This too has the function of improving air flow at the bottom of the pile. 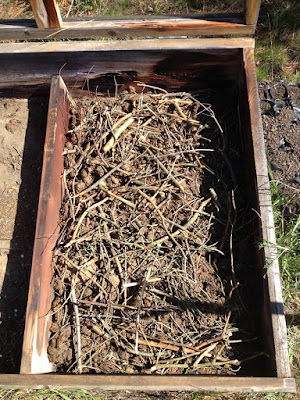 Then a layer of dry leaves I'd raked up the week before. In between the rows of wooden benches by the main campfire area we have to rake away the leaves every spring, otherwise they increase dampness and rot on the undersides of the benches. If rot is what you want, however, then damp leaves are just the thing. People actually pay money at garden centres for bagged organic matter rich in carbon. Around here it just grows on trees. 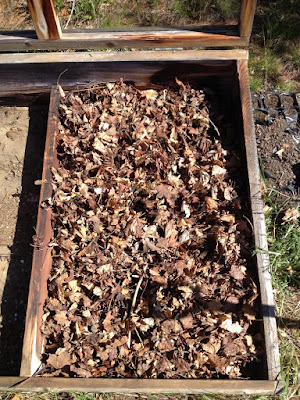 Next I threw on the kitchen scraps we had sitting in a bin on the kitchen counter. Any 'fresh' vegetable matter, that is, with some juice still in it, provides the counterpart to the carbon in the leaves: nitrogen. The best naturally-sourced nitrogen is in animal manure or fresh grass clippings, but I only managed to score some of that later on. 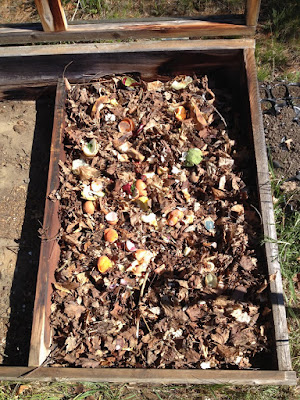 Then a few shovelfuls of dirt, you know, to give the compost pile a tangible example to live up to. And a good dose of water from the watering can. And finally, for good measure, I threw in some gorgeous worms from someone else's composting experiment last summer that had survived the winter in a bin in the basement. 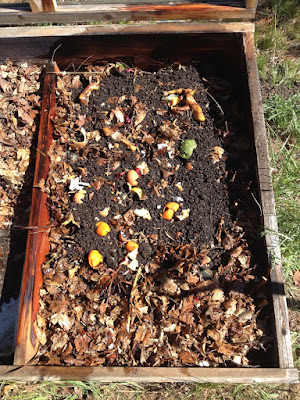 A side note on worms: I kept a bin of composting worms in my kitchen cupboard at home for years. When done right, they give off nothing but a faint and pleasant earthy kind of smell. The trick is checking on them regularly and making sure they have the right level of moisture in the bin. A sprinkling of water or a handful of shredded newspaper adjusts the balance. And worms are like babies- their food goes down easier if it's chopped up real small. 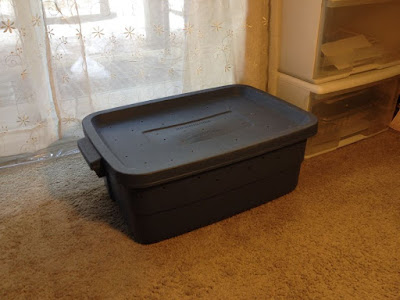 Finally, I put my new compost pile to bed, tucked in with a final layer of leaves, and closed the glass lid. The main obstacle to composting in our area is hungry bears, but with the combination of a well-fitting lid, solar heat to speed the breakdown process, and a high carbon ratio provided by all those leaves, I guessed we wouldn't attract anything large than a mouse. So far that guess has proven accurate. 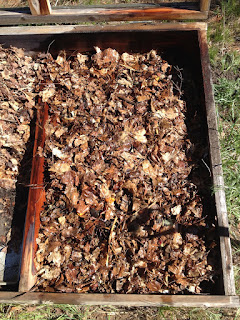 The picture below was taken five weeks later. This afternoon, to be precise. We'd been watering the pile almost every day with a full watering can, to keep it nice and moist. We'd been leaving the lid on, to keep it nice and hot. We'd been adding three people's worth of kitchen scraps- veggies, cooked grains, bones, anything. I mowed the grass yesterday and threw a big pile of fresh, moist grass clippings onto the left-hand side (I'd already prepared the ground with pitchfork, sticks, and a layer of leaves). Twenty-four hours later that nitrogen-rich pile of clippings was quite warm to the touch, even on a cloudy day. 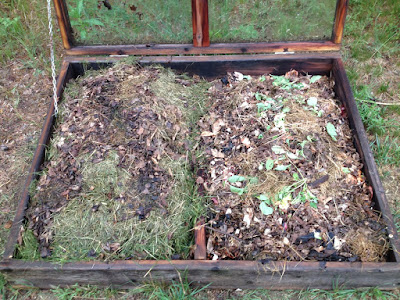 As I mentioned earlier, this is an experiment. Like any experiment, you have to be willing to end up with something gooey and funky if you mix in the wrong things at the wrong time. There are very precise formulae for making good compost, involving high or low temperatures, different ratios of carbon to nitrogen, and leaving it to sit or stirring it regularly via pitchfork or friendly burrowing critters. I followed no precise recipe except for the initial layering steps I've outlined here, which I took from John Jeavons' classic book How To Grow More Vegetables. But my pile seems to be working out so far.

Ideally an experiment should be carefully observed, well-documented, and replicable by anyone with access to the necessary equipment. Oh, and fun. Experiments should be fun, too. Because happiness is a warm compost pile. 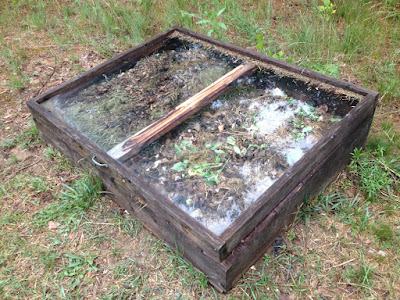